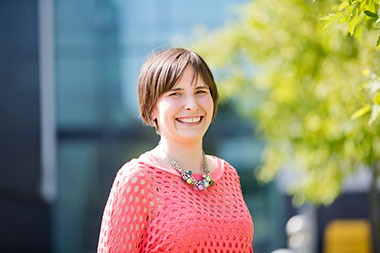 When Christine Garrett from Comber was diagnosed with breast cancer in May 2011 she found Cancer Focus NI’s free counselling service a great support.

“I was working as a nursing auxiliary in the Belfast City Hospital Intensive Care Unit and had just finished a 12 hour shift when I felt a small lump in my right breast. When I got home I mentioned it to my mum. She checked me and agreed that she could feel something too and advised me to call my GP for an appointment.

“A few days later I was examined by my GP. Due to my young age she hadn’t really considered cancer, but when I expressed concern about a family history (my mother had ovarian cancer and my gran had breast cancer), I was referred to the Ulster Hospital.

“I was absolutely amazed at the service I received at the Breast Clinic. I had a mammogram and a biopsy in the morning and was told I’d receive the results that same afternoon. In between times I called my mum, read a few magazines and tried to relax.

“Initially I was in the waiting room with lots of other women. One by one they disappeared. Looking back I should have realised something was amiss. I was the last one standing.

“A wonderful breast cancer nurse came over to tell me that the consultant was ready to give me my results. At that stage I was still oblivious. But I was only 27.

“When the consultant entered the room it was the look on his face that told me something was wrong. “I hate to tell you this but you have breast cancer,” he said. I just didn’t believe him. One minute I was shouting at him, the next I had crumbled. I just couldn’t take it in. I kept thinking about how I was going to tell my mum.

“I picked up the phone to call her. When she answered I just blurted out, “Mum, I have cancer,” I heard a cry and handed the phone to the nurse to explain. I just couldn’t do it.

“On the way home I called my Minister for my mum and dad’s benefit. I wasn’t so much concerned about me – I just wanted them to get the support that they would need.

“When I arrived home my brothers and their wives was there. I told everyone to go back to work and not to worry about me. I kept telling everyone that I’d be fine. The gravity of my situation had still not sunk in. Our Minister and our Deaconess then arrived down to see us.

“It was only in June when I went in for my lumpectomy that I think it finally hit home. I then went through six courses of chemotherapy and 15 courses of radiotherapy. I found the treatment tough going, tougher than I’d thought, but I had the help and support of my family and friends, one friend in particular who had gone through exactly the same thing. Their support was immeasurable.

“I continued to take Boys Brigade (BB) in Ballygowan throughout my treatment, trying to keep my life as normal as possible. My hair started to fall out, and although I hate my wig, I wore it so the boys wouldn’t know any different.

“It was at a BB Church parade when the President of the Battalion asked everyone to remember me in their prayers that the boys I led asked one of the other leaders what was wrong with me. After hearing that, I decided to tell them that I hadn’t been well and that the medicine I was taking to help me get better made my hair fall out. One of the first comments was “Can I see you without hair?” They all thought I looked cool. The boys and the other leaders really helped to keep my spirits up.

“Because of the family history of cancer I was offered the genetic testing and decided to have it done. It came back positive for BRCA2. I was a bit shocked but deep down I think I had suspected it.

“I spoke with my consultant and he discussed the option of a mastectomy and reconstruction. When I heard the statistics I knew I didn’t have a choice. I wanted a double mastectomy. My choice was to stay around for a long time. I had nieces and nephews I planned to see grow up!

“On 3rd June 2013 I had both of my breasts removed and temporary spacers inserted. That September I had my reconstruction. I felt like a weight had been lifted off my shoulders. Now I know that cancer can’t come back to my breasts it’s the most amazing feeling for me.

“The whole process took it out of me. Some days I felt low, others I realised that I was alive and that I’d beaten it. I had a lot of help and support throughout my treatment and attended counselling at Cancer Focus Northern Ireland which has helped me enormously. My counsellor, Barbara, helped get me out of my shell again. There was a lot of work to do but I slowly got back to the old Christine.”