Cancer patient calls for Assembly to step up

Breast cancer patient Tracy Martin, from Banbridge, is a fantastic supporter of our equal access to cancer drugs campaign. She made a poignant plea to MLAs at the Stormont launch of our new manifesto when we called on the Assembly to create a better strategy for cancer in NI. 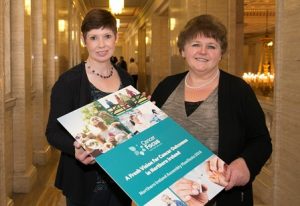 Here are her words:

Although I am delighted to be given the opportunity to speak today, it also saddens me that the NI Assembly does not seem to have cancer patients in their foremost thoughts.

The first paragraph of Cancer Focus’s manifesto fills me with dread as I read the statistics on cancer diagnosis, survival and death due to this horrendous disease.

Recently was it announced that breast cancer alone has increased by 53% over the last 20 years. That is one cancer, and one statistic. Group them all together and it makes for frightening reading.

That means that approximately a half of everyone here will get cancer or be affected by it. Yes – that’s you – or your family. Will you wish then that your political party had taken action rather than talked about change?

While the public wait for the organs of government to grind, ordinary people – people who have votes – are waiting a ridiculously long time to see a GP, to see a consultant, to get surgery or to start treatment. Patients on average wait 60 plus days from diagnosis to treatment. Trust me – that is the longest two months of your life.

Can I quickly take you through my journey.

In 2006 my dad – Brian Coburn – developed a very painful back. Painkillers didn’t help and the pain kept moving, which was odd. His GP was so dismissive and refused to refer him for an MRI scan. After months of agony Dad decided to go privately. Two of his vertebrae had collapsed so you can imagine his pain. He was admitted to hospital and after two weeks of tests was diagnosed with multiple myeloma.

My family and I couldn’t believe what we were hearing. My dad shouldn’t have cancer. He was fit, active and healthy, didn’t smoke yet here he was with a rare cancer that was slowly eating away at his bones. Had he been left untreated, like his GP advised, he would have been in a wheelchair within months and dead within a year.

Instead, Dad fought his disease with tremendous dignity, fortitude and strength. He gave up his time to sit on cancer related committees, patient forums, anti-smoking campaigns and gave numerous presentations to patients and physios on the benefits of exercise for cancer patients facing cancer fatigue. Never once did he say ‘why me?’ or feel sorry for himself. 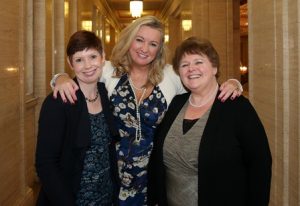 Tracy with Roisin and her local MLA Jo-Anne Dobson

In 2013, I was diagnosed with breast cancer. Again I couldn’t believe what I was hearing. I didn’t have a lump or redness or any of the ‘normal’ symptoms. I didn’t fit the ‘criteria’ for women susceptible to breast cancer, yet I was being told I not only had one tumour but two separate ones in each breast.

I had double cancer. A double mastectomy was on the cards, which I could deal with as I just wanted these things off me ASAP. Then I was told the cancer had spread to my lymph nodes. Still I’m thinking, ‘OK, fine, let’s get started with treatment’. Then came the words, ‘Oh, you need to have a CT scan to see if the cancer has spread to your organs’.

At that point my world crashed and I realised I could die. What about my children and my husband? How would they cope? How would I tell them?

I went through the surgery, the chemo, the radiotherapy and am now on hormone blocking medication for 10 years. This basically puts you into a forced premature menopause. I was 39.

My dad taught me how to deal with having cancer. You do what your consultant advises and you get on with it. You hold your head up high, put your shoulders back, put your chest out (if you have one!) and carry on. And you never lose your sense of humour. You do not sit in a chair and feel sorry for yourself. So I did as I was told!

Mummy are you going to die?

The hardest part of having cancer for me was telling my family. My poor mum, dad and husband had been through so much already and my two brothers were across the water and felt helpless. Then I had to tell my boys, who were six and nine at the time. My youngest’s first question was ‘Mummy are you going to die?’

I have watched some close friends die from cancer but nothing was worse than watching my dad. 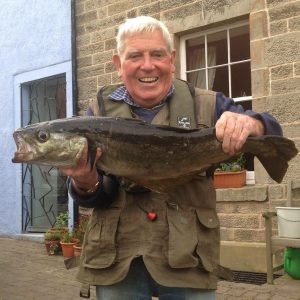 His consultant knew that current treatments weren’t working and that he needed a drug called Velcade. He’d had it before and it worked well for him. Yet, as he was in relapse, he wasn’t eligible for it again due to the postcode lottery.

We fought tooth and nail for months and eventually in October Dad was so scared he was going to die and was so desperate that he paid for a course of the treatment. It cost him thousands. He got one dose but was so ill by this stage he wasn’t fit to get anymore.

He should have been given the drug in January when it would have been effective and not spent the last few months of his life fighting a failing system the government has in place for Northern Ireland cancer patients.

Dad was part of a BBC Stephen Nolan documentary which was aired on Feb 15 called ‘The Truth About Cancer’. If you didn’t see it, I would urge you to watch it. It exposed the good and bad points of treatment that cancer patients get in this country and exposed the emotional effects a cancer diagnosis has on the patient and more importantly, their family.

The last interview Nolan did with my Dad was in August ’14 when he was admitted to Belfast City Hospital with an infection. Stephen quizzed him about getting the drugs he needed and asked Dad was he scared. He said he was but most of all he didn’t want to leave his family.

He made a statement that will stay with me forever. He said that the way the NI government was treating cancer patients, like him, denying them treatment, was the equivalent of manslaughter. My beloved dad died on 8th Nov 2014.

Dad knew it was too late for him but he wanted to keep on fighting for others and told me to keep on the campaign along with Roisin. He wanted to make a difference for people like you, your brothers/sisters/parents/sons/daughters/neighbours/friends. Cancer doesn’t care about religion, about age, about where you live or what job you have. I urge the political parties in NI to follow my dad’s lead and understand the needs of cancer patients. The needs of your constituents.

Make the Cancer Focus NI manifesto your priority. Don’t just talk about it. Listen to what your constituents need and want. Take action – not reaction, and don’t make empty promises.

Pledge to make a difference and make it now. Get NI back in line with the rest of the UK in its cancer treatment, rather than being on a par with Eastern European countries. It is decisions like these that political parties will be remembered for and voted for – not what flag you are under or which road you walk down.

Above all remember. You or someone close to you will need cancer treatment in NI so make the change now – before it’s too late. Or do you want to have their death on your conscience?