Ciaran Stewart, from north Belfast, tragically lost his wife Fiona to breast cancer on 2 April 2013. Ciaran and children Cára, Ryan and Caiden used the lifeline Cancer Focus Northern Ireland Family Support Service. Ciaran tells how we can help when someone in the family has cancer. 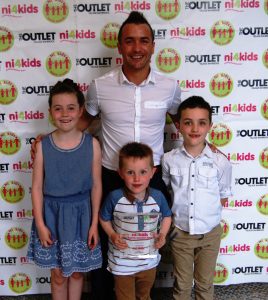 Young mum Fiona Stewart and her family went through a rollercoaster of emotions after she was diagnosed with breast cancer five years ago when her youngest child Caiden was just six months old.

Heartbreakingly, after a brave battle, Fiona lost her fight in April 2013 leaving her husband Ciaran to raise their three young children, with help and support from their family and Cancer Focus Northern Ireland.

“Not long after Caiden was born, Fiona noticed a lump in her breast but thought it as just a blocked milk duct. She went to her GP who thought the same but referred her to Belfast City Hospital for a check-up,” Ciaran said.

“I went with her because by that stage she’d become a bit nervous, but never in our wildest dreams did we think things would turn out so badly. They did the scan, and from that point things took off at 100mph. It felt like all hell had broken loose.

“Then she started a year of chemotherapy and radiotherapy, which was tough, but she was very courageous through it all,” he recalls.

“Fiona was one of those people who had such great fight in her. I don’t think she realised the severity of her illness. When she was diagnosed she took the news quietly and then said ‘Right, when do I start treatment?’ She was already thinking, ‘Let’s do this’. She gave us all great strength and hope,” he remembers.

“By December 2011, everything was going well. There were no cancer cells left and we were happy with her progress. It seemed we were getting our lives back on track – that was a good Christmas.” 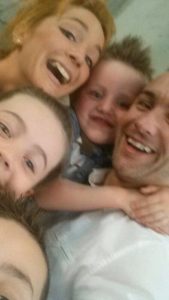 But it was not to last. One morning a few months later, Ciaran looked at Fiona and thought she looked badly jaundiced. A neighbour who popped in for a cup of tea thought the same.

“Another scan revealed that there was no cancer in the breast area but that it had spread to the liver,” Ciaran continues. “It was devastating news. We couldn’t believe it – after all she had come through.

“I asked the oncologist if it was terminal. He said it appeared so. I thought ‘Oh God, I can’t believe it’. I remember going to the toilet in the City Hospital and breaking down, totally devastated, completely numb,” Ciaran reveals.

“Even then, I think we were in denial that it could be terminal. We had been so pleased with the previous scan, to get a gunk like that was terrible. It was just not getting better.”

In the months after, there were highs and lows. In one scan the tumours had shrunk by 50%, in another they had doubled in size. One day there seemed to be progress, the next they were knocked back.

“In the last few months of 2012 Fiona was in hospital a lot. She became very weak and the disease was taking its toll. Cancer can be very cruel. I knew in my heart she wasn’t getting any better – I knew it was going to be our last Christmas together, she just wasn’t herself at all. It was so tough trying to put a brave face on for the children and for her.

“I remember one weekend in particular, it was the worst. Fiona was so restless. She blacked out and I had to call the paramedics. The cancer had spread to her brain. There was nothing the doctors could do, just give palliative care.

“In hindsight we should have done more to cherish every single moment, but we never really believed it would turn out like this. Even when the cancer spread to the liver we were still in denial that it would be terminal. At times Fiona could only ask what had she done to deserve this.”

One bright spot was that Fiona got to meet her favourite band, Westlife. One of her best friends contacted the band’s management and arranged for her to have her photo taken with them after a concert at the Odyssey.

“She had to get out of hospital for the event and go back straight afterwards. She was on such a high during the concert but it took a lot out of her,” Ciaran recalled.

“It was such a difficult time. I had terrific support from family but I was working and coming home to look after the children, never mind the emotional stress. But you can only do what you can do.

“It was hard to cope at times. You are trying to put a positive front on for everyone else. When you have three young children you have to keep it together for them.

“One of the hardest things I ever had to do was tell the kids that their mum was going to die. It was terrible. I tried to tell them it was nothing to be scared of, that daddy going to be here. They are resilient, though, and I think they are doing all right.”

Ciaran said it helped that the children were aware of everything that was happening all through their mum’s illness. “I remember one of the counsellors saying it was best to be open and honest. It was hard at the time but now I’m glad we didn’t fluff it up. I think now that it helped them to cope a lot better.

“We still talk about her all the time in the house. The kids’ll say to me, ‘Remember how mum loved when I did this?’ I’m so glad that they feel they can talk about her and don’t have to smother their feelings.”

Ciaran said that the Cancer Focus NI family support service is one of the big factors which helped him through.

“The charity has been very good and I’m so grateful for all the help and support we received. We went along to the group nights when the children meet youngsters in a similar situation and I was able to chat with other parents. It did us all good to know that we were not the only ones going through this. It sounds clichéd but it does help and is so important.

“The children could talk in an informal atmosphere, through games, drama and various activities – if they said they miss their mum, everyone knew exactly what it meant to them. They were able to ask all those awkward questions that perhaps they didn’t know how to ask me, make memory boxes, have little outings. It’s a wonderful service.”