Denise Patrick (61), from Belfast, is undergoing treatment for breast cancer and multiple myeloma. Both cancers were diagnosed within a month of each other, leaving her reeling.

The retired London-born professional, who worked for 26 years as a head teacher in several challenging inner-city schools, recently celebrated 40 years of marriage to Paul. They have two children and six grandchildren. Here she   explains why she is a passionate advocate of  cancer research and appeals for everyone to support our In Pink campaign. 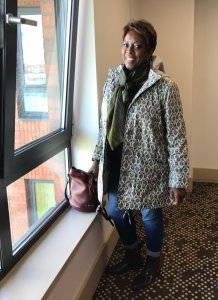 “While most people wait three weeks for their breast cancer to be treated, I had to wait a traumatic seven months.

Fighting two cancers meant doctors had to choose which one to tackle first before they moved onto the next. It was a terrifying ordeal as I agonised over whether their decision would be the right one.

But the myeloma, a type of bone marrow cancer which was diagnosed first in August last year, was already affecting many areas of my body. The lobular breast cancer, though serious, was localised, so it took a back seat.

My journey has been riddled with medical complications including a pulmonary embolism and a rare blood virus which caused temporary paralysis.

But as we raced against time to make sure my breast cancer didn’t spread, I received uplifting news that the chemo for the myeloma along with a hormone suppressant drug had probably helped shrink the breast tumour.

In May 2017, I had a wide section lumpectomy followed by radiotherapy in July and was given the encouraging news my back-seat driver was no longer a passenger in my life.

I’ve been in remission from myeloma since last January and recently been taken off a breast cancer suppressant drug, which was causing me pain. I’m feeling so much better now and remnants of my old energetic self are beginning to return.

I’m due to go for stem cell transplant in the next few months and even though this is daunting, I feel ready to take on the challenge.

I’ve always been a very active person so when I took early retirement six years ago I couldn’t understand why my body ached more than normal. I knew something wasn’t right.

I went to A&E with what turned out to be a hiatus hernia. The doctor advised me to get a CT scan, as he had further concerns.

Within 48 hours my life had changed. I was diagnosed with multiple myeloma with osteolytic lesions, areas of severe bone loss, in various parts of my body. It was confirmed following a bone marrow biopsy. The shock left me reeling as I tried to make sense of the numbing news.

My family was devastated and reacted badly to the news. There’d been no mention of the disease in our family up until now, but then I discovered there had been leukaemia on my father’s side and breast cancer on my mother’s. That older generation had tucked it under the carpet. I’m glad that sort of sweeping denial will stop with me.

No one wants one cancer, let alone two, but I’ve decided to take a positive and undefeated approach. I’ve had a tough time and gone through a rollercoaster of emotions. Yet I’ve I found many strategies to help me cope and I’ve dug deep inside myself to discover a well of resourceful self-belief that has kept me pushing forward.

I’ve had invaluable counselling support from Cancer Focus NI and joined the charity’s Writing for Life sessions – the best thing I’ve ever done.

Someone recently told me my cancer ‘doesn’t pity me’ because I look so well. I openly talk about my cancer not to elicit pity but to enable others to feel comfortable around the subject.

While the past year has been traumatic, it has also been humbling as so many people have held me in their prayers across all religions.

I make a point of urging people to be aware and support the Cancer Focus NI campaign to raise funds for breast cancer research.

I know only too well that every new development and discovery gives sufferers more time in remission and as treatments improve so does our hope.” 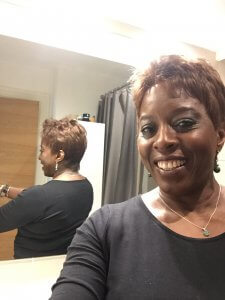