A group of energetic Co Antrim ladies have walked an amazing two million steps in a week to raise a bumper £2,500 for Cancer Focus Northern Ireland’s breast cancer awareness and fundraising campaign during October. 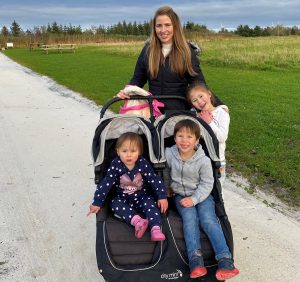 Emma Dowds Tsang with her children , Aoibheann, Eoin and Meara.

Twenty-two women, most of them mums, have been out and about pushing buggies and pacing out power walks to notch up the steps for the charity.

Emma Dowds Tsang and members of her fitness studio, T-Fit Studio 01 in Dunloy, decided to make the most of their outdoor exercise time to raise money for the charity, which has been struggling to survive during the Covid-19 pandemic.

Cancer Focus NI has furloughed most of its staff, put its face to face services on hold and postponed most of its fundraising activities. However, some of the charity’s services have been continuing at a lower capacity on zoom, by phone and in private Facebook groups including counselling, art therapy, stop smoking sessions and Sing for Life choir practices.

“We were long overdue a social event and had decided to have a nice afternoon tea. The date we had planned was in October, breast cancer awareness month, and so we thought it would be so worthwhile to join the Cancer Focus NI Support your Girls campaign.

“Alongside the afternoon tea some of the girls had agreed to complete a sponsored class-a-thon so that we could drum up as much support and funds as possible to contribute to the charity. Having all had experiences where mothers, sisters, cousins or friends have been directly affected with breast cancer, we wanted to do what we could to ‘Support Our Girls’, said Emma.” 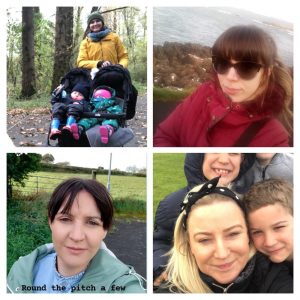 Walkers who took part in the 2 million steps challenge

“Unfortunately once the new restrictions came into force we had to change our plans.  This is where the one million step challenge idea came from. It started with 10 of my members agreeing to take part but when the word got out about what we were doing and the cause we were supporting, we were soon 22 strong. One of the girls, Karen McMullan, had to isolate but she didn’t let that stop her and instead did almost 90,000 steps on the treadmill.”

Emma added: “We were aiming for one million steps but reached that target by the end of day four, so, being the competitive ladies we are, we set ourselves a new target – two million steps. We continued to push on and managed to make it to 2,080,519 steps, which surprised us all.

“We finished off our fundraiser with a celebration takeaway afternoon tea which was a great success.  Delicious cupcakes were donated by Pappy’s Bakery in Dunloy and Geraldine Cochrane, one of my members who is a home economics teacher, baked up a storm. I’d like to thank everyone who has helped with our fundraiser in any way and especially all those who donated. Special thanks to Hardy Bros of Rasharkin for their generous donation.  We were overwhelmed to raise more than our initial target with a final total of £2,500.”

Rosie Forsythe, community fundraising manager, Cancer Focus NI, said: “Huge thanks to all the ladies who took part and to everyone who donated. It just shows what people power can do. One in ten women in Northern Ireland is diagnosed with breast cancer, the most common cancer in women. We know that there is a great need for more support among younger women who have been diagnosed.

“With the money raised from our Support Your Girls events, we plan to provide a unique new six week service that will give these women a chance to speak to experts on a wide range of topics such as infertility and sexual relationships, as well as meeting others in a similar situation. 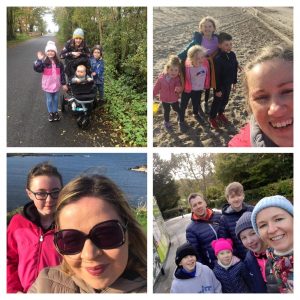 “The young women we want to help are at a stage in their lives where they may be making big life choices, such as marriage and starting a family. They may have young children and don’t know how to tell them they are sick.

“A breast cancer diagnosis can dramatically change hopes and plans for the future. It is vital we have the best possible support in place for these women, especially now when there are so many other stresses and difficulties in life because of Covid-19.”

“We really need all the support we can get at the moment and can’t continue our work without your help.”

Cancer charity welcomes ban on smoking in cars with children