Linda McCartney (55), Belfast, is a Cancer Focus NI stop smoking specialist who takes sessions at Dunmurry Dental Clinic. She was a 20 a day smoker but gave up two years ago. She’s married to Brendan and has four sons and four grandchildren.

As part of No Smoking Month in March, she urges smokers to make this month the start of their smoke-free lives. She says: 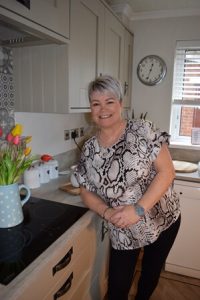 school. It was the thing to do at the time and you wanted to be one of the crowd. Friends would offer you a cigarette or you could buy singles in the corner shop – two No 6s and a pack of Beechnut for 5p or something ridiculous. How times change.

I quit myself by going cold turkey when I was about 41 for three and a half years. Then I went on them again. It was a social thing, if I was out with friends for a few drinks, I’d ask for a puff, then I was asking for a whole cigarette. Then I was embarrassed because I was smoking other people’s cigarettes so I bought a pack and that was me back on them again.

Another time I stopped for a full year. I love to have a smoke on holiday, sitting outside in the sun, watching the world go by. I thought I could go on holiday and smoke and stop again when I come home. I bought a carton when I arrived in Tenerife and enjoyed them. I didn’t bring any home and I had no intention of smoking, but I was hooked again.

This is my third time. I am a diabetic and I know myself that smoking and diabetes are not a good combination as it can affect your circulation. I had an appointment with a podiatrist in October 2016 who took the blood pressure in my legs as I had been feeling some pain. 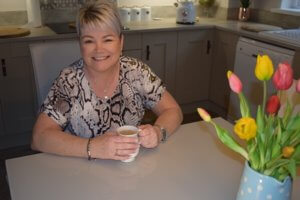 She told me the left leg wasn’t great and if I continued to smoke, in the next 10 years the damage would be done and there would be no going back. I couldn’t get that conversation out of my head. And I kept telling myself that I was going to have to do this. I really wanted to get rid of them. It got to the point that I wasn’t even enjoying them.

But I’d make excuses, I had different things coming up, I’d do it afterwards, it was bad timing, I was starting a new job…

I started a new job as a dietetic assistant with one of the Health Trusts. No one there smoked so I would have three cigarettes in the car on the way to work in the morning.  I could smell the smoke on me, that’s terrible, I wanted to stop.

My youngest son was 18 in February 2017, so I thought that’s a marker. I’ll stop then. But I put it off, with all the stress of organising a party and clearing up all the mess afterward, it wasn’t a good time. More excuses.

I happened to be looking through emails at work and stumbled upon some information about smoking cessation specialists, which I hadn’t heard of before. I thought, what’s that about? The Trust employed people to come into your work and help you, so I set up an appointment with Darren Whiteside, who is both a Trust and a Cancer Focus NI stop smoking specialist.

I told a work colleague that I was going to a meeting with Darren and but I was busting for a smoke. I said as soon as the meeting was over I’m going out for a smoke. 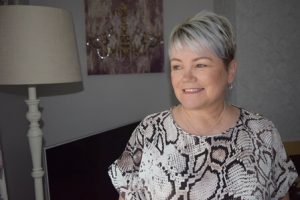 Darren and I chatted away for nearly an hour and after the chat I didn’t go out for that smoke. I couldn’t believe that. I had about nine cigarettes left in the pack. I didn’t smoke any on the way home, one tip Darren gave me was not to leave the cigarettes handy, put them in the boot of the car. I waited until I got home to have one.

I had a full carton in the house but I was determined I wasn’t going to open it – I knew if I did I would finish them. I decided to finish the pack and sell the carton, which was a bit of an incentive. This was the Friday before No Smoking Day on the following Wednesday. I wanted to be off them by then.

I had two on Saturday and one on Sunday. By Monday I was off them.  I didn’t miss a meeting with Darren, once a week for 12 weeks. That was two years ago and I haven’t smoked since. I can’t get over how well I’ve done. And how easy I found it.

Because I’m a diabetic my sugar levels have gone pear-shaped and are not good at the moment, I’m probably eating more sugary things since I stopped. I’m finding the addiction to sugar hard to kick, I’m still struggling with that but I’ll get there.

I asked Darren how he got into smoking cessation work as I thought I would enjoy helping other smokers. I did a course and hold a two hour clinic every Friday. I’d like to do more but I’m also a support worker for adults with learning disabilities.

I think the fear of giving up is worse than actually stopping. The whole stress of thinking about it, how am I going to do it, is huge. The nicotine patches were a God-send and I used the gum too. I’m sometimes tempted if I’m away for the weekend or I’m around smokers, but I get over it.

If I started again I would be livid. I’d be back to square one and I want to move forward.”

For more information on the services available and useful tips to stop smoking, visit www.cancerfocusni.org/stopsmoking , the PHA’s website at www.stopsmokingni.info  where you can also order a Quit Kit free of charge which will help you plan your quit attempt.

Cancer charity welcomes ban on smoking in cars with children